This content is no longer available. However, if you already have access to this event, you may need to login first. 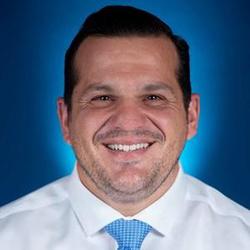 The Speaker is updating the description for this Talk. Please check back here later.

You need to be registered as an attendee in order to comment on this talk.

Two-time Olympian Amin Nikfar is in his second year as an assistant coach for the throws events after one season with UNC Director of Track & Field and Cross Country Chris Miltenberg at Stanford. Despite the cancelation of the 2020 outdoor season due to the coronavirus pandemic, Nikfar still managed to show what is to come for the Tar Heel throws program. Under Nikfar’s guidance, Daniel McArthur earned his second All-America nod, defended his ACC indoor shot put title and broke his own program record with a throw of 66-9.25 (20.35m) during the indoor season. The outdoor season was set to be one of the most exciting in program history with ACC record holder Jill Shippee (hammer throw) and first team All-American Madison Wiltrout (javelin) returning to the field, this time with Nikfar overseeing their training. Prior to Carolina, in his one season at Stanford, Nikfar coached Mackenzie Little to an NCAA Championship title in the javelin with Jenna Gray placing fourth in the same event. He also coached Lena Giger to a runner-up finish at the 2019 NCAA Indoor Championships and multiple school records in the shot put. In the men’s event, Nikfar helped Liam Christensen set three records during his freshman season — Christensen threw 245-4 (74.78 meters) to break Stanford’s Big Meet, school and freshman records. Nikfar was named the 2019 USTFCCCA West Region’s Women’s Assistant Coach of the Year for his work with his four women’s NCAA Outdoor Championship competitors. Before Miltenberg brought Nikfar back to his home state, Nikfar spent three seasons — one as associate head coach and two as an assistant — at Southeastern Louisiana University where he coached throws and the high jump from 2015-18. Nikfar’s athletes at Southeastern Louisiana earned four All-America honors. He coached 11 NCAA East Prelims qualifiers, nine Southland Conference champions and 15 conference podium finishers. Nikfar also coached the Lions’ Alex Young to NCAA and USA Championship titles in the hammer throw in 2017. That same year, Young won the U.S. hammer and weight throw titles and an NCAA weight throw championship under Nikfar’s guidance. Young was also an IAAF World Championships qualifier and NCAA hammer runner-up and continues to work with Nikfar in his professional career training. Nikfar has worked with a number of other programs since graduating from the University of California, Berkeley in 2006. He served as a volunteer assistant coach during his final two years at Cal and was a volunteer assistant coach at Northern Arizona University from 2006-2009. After a brief coaching hiatus, Nikfar returned to coach throws at St. Francis High in Mountain View, California in 2014 and went on to coach throws, jumps and multis for one season at University of New Orleans. In New Orleans, Nikfar’s athletes combined for nine school records and a Southland Conference championship. Nikfar competed in the 2008 Beijing and 2012 London Olympic Games and appeared in two IAAF World Championships. He was a nine-time Iranian champion and broke national records six times. He was the 2004 Asian indoor champion and his collegiate-best mark still ranks No. 7 on the University of California Berkeley’s all-time list in the shot. His lifetime best of 65-9 ½ (20.05 meters) from 2011 remains an Iranian record. Nikfar was born in San Jose, California before moving to Santa Clara, California where he was a two-time state shot put qualifier at Wilcox High School. His coach at Wilcox was Mike Buncic, a two-time Olympian who holds Stanford’s Cobb Track and Angell Field discus record of 226-3 (68.98 meters).

You need to register to perform this action. Simply enter your email into the box below.

We use cookies This website (and some of its third-party tools) use cookies. These are important as they allow us to deliver an exceptional experience whilst browsing the site.